Chitragupt Samaj UK proudly announces that due to incessant efforts of Dr Santosh & Mrs Rita Verma, a picture of Shri Chitragupt Maharaj and his family has now been installed in the Geeta Bhavan Mandir. The
Samaj acknowledges that this was only possible due to the blessings, help and co-operation of Shri Dharm Duttji, chief priest of the temple. With the grace of God it is hoped that a statue of Shri Chitragupta Maharaj
will also be installed in the temple in the near future. 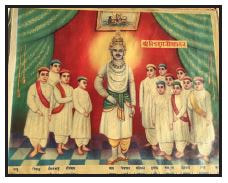 Sauhard Bhushan (Son of Mr Sudhir Sahay & Mrs Usha Sahay) after passing A Level, has been selected for Maths plus Computer Sciences course in the Sheffield University.

Shambhavi (Daughter of Mr Pranay Kumar and Mrs Kavita Pranay) joined as Medical student at the Cardiff school of Medicine.

Ayushka Sinha (Daughter of Pallavi and Sasmit Sinha) has achieved A (13 subjects) in GCSE.


Obituary
Smt. Giriia Devi, a beloved wife, mother and grandmother passed away on 4th July 2013. Her life was beautiful and her death peaceful. It was the transition that was troublesome, but for all her hardships she always wore a smile and never complained. The love and kindness she shared, and what she did for our grieving family will remain in our hearts for ever, and she will be dearly missed on all occasions.
Prabhat Verma (son) & Neil Verma (grandson)